How to Sustainably Achieve and Protect Beer Clarity

Removing turbidity after fermentation and maturation is the first step in achieving beer clarity and stability. Post clarification, colloidal and microbial stabilization are the key steps to achieve a beer in the appealing appearance which makes filtered beer so successful in the market.

The Challenge of Maintaining Clarity

Having achieved initial clarity, this however, may not last. Clarified beers must display stability with respect to haze, meaning that the beer must stay bright during the period from dispatch from the brewery to consumption. Beer haze and its chemistry is a complicated matter. A wide range of substances can cause non-biological haze formation (colloidal haze).

The most important type of non-biological haze is caused by reaction of proteins and polyphenols which are brought into the brewing process by the raw materials, including hops. In more detail, we are looking at low molecular weight polyphenols cross-linking with proteins by weak molecular interactions, such as hydrogen bonds.

Consideration needs to be given to the overall shelf life of the product, which may include transportation, accompanied by agitation, changing temperatures or exposure to sunlight.

All of these factors have the potential to negatively influence the clarity and flavor stability of the beer.

The Biggest Threat to Persistent Clarity

Colloidal haze is formed during cold fermentation and maturation and is usually removed during clarification/filtration, however the reactions between proteins and polyphenols can continue after filtration if sufficient quantities remain!

When it comes to the polyphenols, they are divided by their ability to form complexes with protein, which is referred to as tanning capacity. The most important tanning polyphenols (tannins) are proanthocyanidins. Tanning capacity rises with the degree of polymerization. Oxidation has a big impact on this type of reaction. The more oxidation, the more reactive the polyphenols become.

Tanning can create a permanent haze and this needs to be avoided!

There are different ways to try to avoid haze formation but given that the primary cause of non-biological haze is the reaction between polyphenols and proteins, modern stabilization methods are targeting to remove the reaction partners, at least one group of them.

While there are different technologies to remove haze active proteins, including adsorption, precipitation and dosage of enzymes, there is only one major technology that reduces the haze active polyphenols: the usage of Polyvinylpolypyrrolidone – PVPP.

One Way to Solve the Challenge: Leveraging Adsorbent PVPP

PVPP is a cross-linked polymer of PVP, a substance which is widely used in medicine, for example. By crosslinking, the molecule becomes insoluble so that PVPP can be completely removed after it has fulfilled its technological task.

PVPP has a large surface area onto which haze-forming polyphenols are bound by strong hydrogen bonding. The PVPP particles adsorb the polyphenols in the beer and remove them.

PVPP can be used as single use material such that it is discarded after each use. However, there is also regenerable PVPP available. In specific PVPP filters, the particles are retained and after adsorbing the polyphenols, the PVPP can be freed from the afore adsorbed polyphenols by washing it with caustic.

The release of microparticles, a classification into which PVPP particles belong, is an unwanted effect that has moved into public awareness recently. PVPP loss in the classic system always represents a threat in that respect. In classic PVPP regeneration cycles, approximately 0.3 to 1% of the PVPP is typically lost during one run. In an industrial set-up, this can amount to several kilograms of particles with every cycle of regenerating the PVPP. The particles that are slipping through the PVPP filter system are retained downstream in trap filters. On the contrary, the fixed-bed Pall CBS technology reduces the PVPP losses to a non-detectable level. The loss of PVPP particles in a CBS system is less than 0.3 % on 1000 regeneration cycles, reducing the loss rates of PVPP particles by a factor of several thousand, compared to the conventional systems. When after years of production the PVPP in a CBS is exhausted, it is exchanged and recovered by Pall and is managed in professional waste disposal systems, not reaching in the environment in an uncontrolled way.

2. Advantageous technology and ease of use

By implementing a CBS System, brewers can realize a reduction of polyphenols through the system up to around 50 % for the total polyphenols and up to around 70 % of the anthocyanogens, achieving more than 10 warm days (0/60). Not every beer needs an intensive treatment, though. The raw material mix and the type of SKU to be produced will influence the need for stabilisation intensity greatly.

In the CBS system, the controlled interaction of the different columns and the possibility to run a regulated bypass enables precise fine tuning of the stabilisation effect. Different customer specific recipes can be programmed into the system easily, enabling the user to treat various production requirements at the push of a button. Due to the compact vessel design of the unit, costs for cleaning-in-place (CIP) and beer losses are significantly reduced when compared to traditional PVPP use or alternative technologies for beer stabilization.

To maintain the clarity of a beer that was carefully filtered to achieve a bright appearance, one must have a look at the parameters influencing haze formation. The most critical reaction is when polyphenols and proteins react to form turbidity. It is widely used technology, to reduce this threat by reducing the reaction partners – those polyphenols and proteins that might stay dissolved after filtration. While the use of PVPP is globally accepted as one of the most effective ways of stabilizing beer against the formation of non-biological haze, Pall’s CBS system represents a sustainable and cost effective PVPP stabilization technology. The system offers surprisingly simple and precise stabilization while reducing running costs and drastically lowering loss rates of microparticles. To learn more about the CBS System please visit our product page. 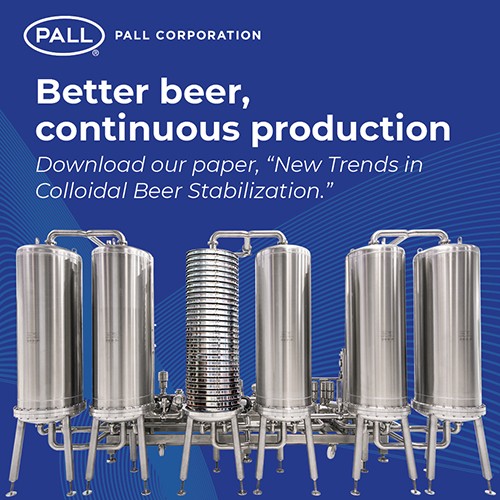 Roland Pahl learned brewing from the scratch. His stages of relevant education comprise an apprenticeship as Brewer and Maltster, University studies to become a Brewing Engineer and a PhD in Brewing Technology. Roland spent most of his career at VLB Berlin where he held positions of the Head of the Research Institute for Beer and Beverage Production and COO. In 2021 he joined Pall in the role of a Beer Market Manager.
Read more